In the aftermath of what was probably Michael Phelps’ last Olympic race ever, I started to think about what happens to Olympians after they’re out of the international spotlight. What do you do when you’ve spent your entire young life trying to accomplish one goal – and then you accomplish it at fifteen? Sometimes it’s the long haul (looking at you, Michael – nice job with the best Olympic athlete EVER record), but that still only takes you to twenty-seven. There’s still a whole lot of life left. So what becomes of it? Here’s a list of 6 decorated Olympians and what happened after their years in the spotlight.

Competed in: 1998 and 2002 Winter Olympics in Figure Skating

Athletic Cred: Michelle Kwan is the most decorated figure skater in U.S. history

What she’s up to now: In 2011, she graduated from Tufts University with a masters in international relations. This interest possibly sprung from being appointed a public diplomacy ambassador by Condoleeza Rice in 2006. She’s also an advisor to Women-LEAD, a US-China co-run organization meant to encourage discussion among females in leadership positions from both countries.

So, hell yeah, Michelle. She’s making the most of her life after the Olympics, even though according to this article she might end up on Dancing with the (oh my god I forgot about you!) Stars. 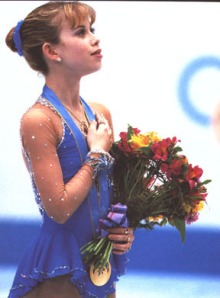 Athletic cred: She is the youngest individual gold medalist in the Winter Games.

What she’s up to now: In 2000, she was on an episode of Are You Afraid of the Dark? (“The Tale of the Lunar Locusts”, if you’re interested in trying to find a download). From her IMDB page, it seems like she tried acting for a little while, appearing in her last role as Carrie in an episode of Malcolm in the Middle in 2006. She’s also a figure skating commentator with NBC/Universal sports. According to her Twitter, she travels a lot, and really loves New York.

I don’t know, Tara, you may have beaten Michelle in 1998 but I’m not so sure about now. But HEY! to each her own. Girl’s still got way more money and free time than me. 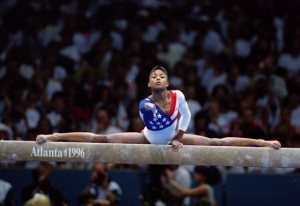 Athletic cred: She is the first black person of any nation to win a gold medal in gymnastics and one of very few women to medal in three different Olympics.

What she’s up to now: Tweeting about how awesome Gabby Douglas is (as we all should)!  In 2010, Michelle Obama named her Co-Chair of the President’s Council on Fitness, Sports, and Nutrition. Just like Tara, she’s dipped in her toe into acting and modeling, appearing in Prince’s music video for “Betcha By Golly Wow”. According to her website, you can book her as a motivational or gymnastics coach for one day events.

Basically, this is exactly what I expect former Olympians to do. But it’s worth visiting her website, so that you can watch an adorable video of her meeting Gabby Douglas.

Athletic cred: His men’s indoor long jump record, established in 1984, still stands. After yesterday’s race, he and Usain Bolt are the only men in Olympic history to win two consecutive golds in the men’s 100 m. He is still the only man to defend an Olympic long jump title.

What he’s up to now: Oh Carl. He’s also tried to break into the acting biz, appearing in shorts like F*ck You Pay Me! and some made for TV movie called Atomic Twister (as Securityman Stu). He also got involved with some spiritual guru named Sri Chinmoy whose shtick was powerlifiting with the spirit. (Personal to Carl Lewis: Dude, you let him pick you up! WHAT?) Then he tried to run for New Jersey State Senate but they disqualified him because he didn’t meet the four year residency requirement.

He’s still a volunteer track coach in his NJ hometown, which is actually pretty cool, but it seems like he should have had a life after running plan somewhere.

Competed in: 1976 Summer Olympics in Track and Field

Athletic cred: He won the gold in the Men’s Decathalon in the era before professional Olympic athletes. He’s also a Wheaties Champion.

What he’s up to now: Oh surprise ALSO acting. However, unlike everyone else on this list. Mr. Jenner has proven slightly more successful. You may have seen him on Keeping Up with the Kardashians. In fact, it seems more likely that people recognize him for his terrible reality TV persona that his stint at the Olympics.

Also, he was in Adam Sandler’s Jack and Jill. Enough said.

Athletic cred: He won seven gold medals in 1972, 1 for each event he competed in. The only person to win more medals that him in a single Olympics is, surprise, surprise, Michael Phelps. He also set seven new world records that year, all of which have since been broken.

What he’s up to now: GODDAMNIT, acting. Well, not really anymore. He tried in the seventies but just didn’t take to it, or something. Instead, he started a real estate company in Beverly Hills, so I imagine he’s doing just fine. Just like Dominique Dawes, you can book him as a speaker. According to his website, “Mark will continue to be a very hot commodity as long as there is an Olympic Games somewhere in the world, or the desire by a group to hear from one of the greatest living legends of all-time in sports”.

His website touts him as the world’s greatest swimmer, which I feel some people might argue with.

If for some reason you were Googling your own name and you came across this article and you kept reading to the end (probably because you just did a Find), I want you to know that I think you’re amazing. You set 39 world records, and you won the most Olympic medals ever. EVER. That takes serious dedication and ambition. With energy like that you could have a career in anything at all. I hope you find something to love as much as you love swimming. I hope you find something else to want and something else to challenge. But I hope you go more Kwan, less Jenner. You can still change the world, man, and I hope you get famous all over again for whatever it is.

Also, if you’re ever in New York, feel free to look me up at ANY TIME.

All photographs courtesy of Wikimedia Commons and various Google Images searches. If you own this image please let me know.

Four twentysomething writerly women felt a little restless, so they came together to make something. This something is that something. All content, unless otherwise attributed, belongs to The Adelpheans. © 2012